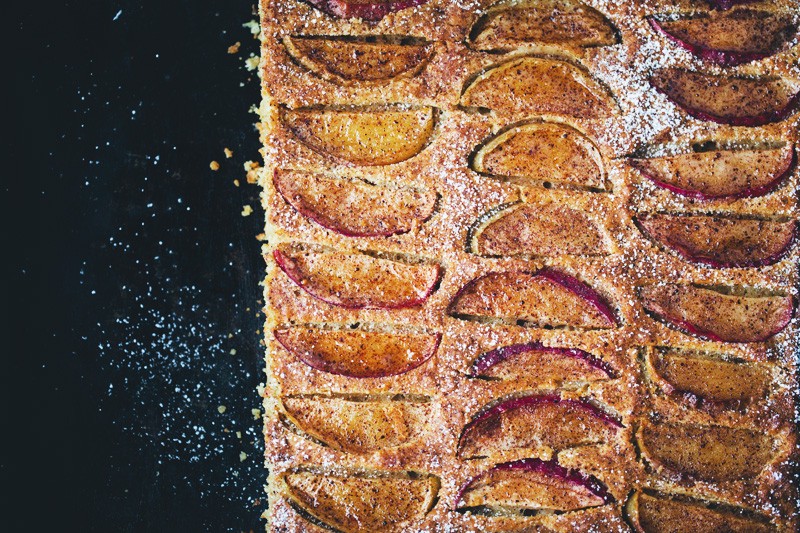 It’s not like I don’t appreciate a good apple cake. And I still think David is an okay guy. But paired together, they have simply been too much this past week. Sometimes I really wish David would just settle for good. He has literally baked and photographed this cake e-v-e-r-y damn day of the week. I know, apple cake every day sounds like an October dream. But when it is served along with constant whining that: “It’s under baked”, “The apples don’t look nice on this” or “It’s way too much cinnamon on top”, it kind of takes the pleasure out of eating it. And with 57+ other things on our to-do-before-the-baby-arrives list, I just couldn’t believe my eyes when he started baking one more cake last night.

But now he is finally pleased with it, and the photos. So here it is: A Simple Apple Cake (overly tested like it was an advanced science project). Seriously though, it is a really good cake. I can’t really tell the difference from the one he did in the beginning of the week but I’m just happy that we can finally move on to more pressing issues. I’ll leave it to David to talk about the flavours. /Luise 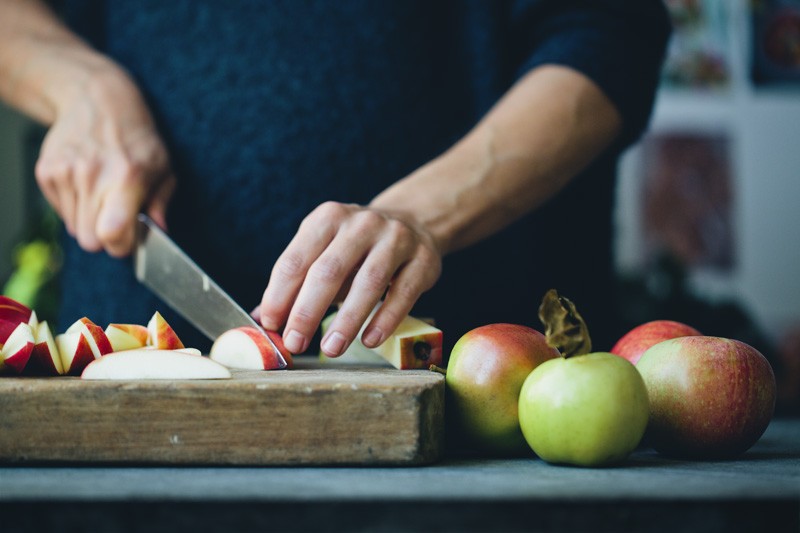 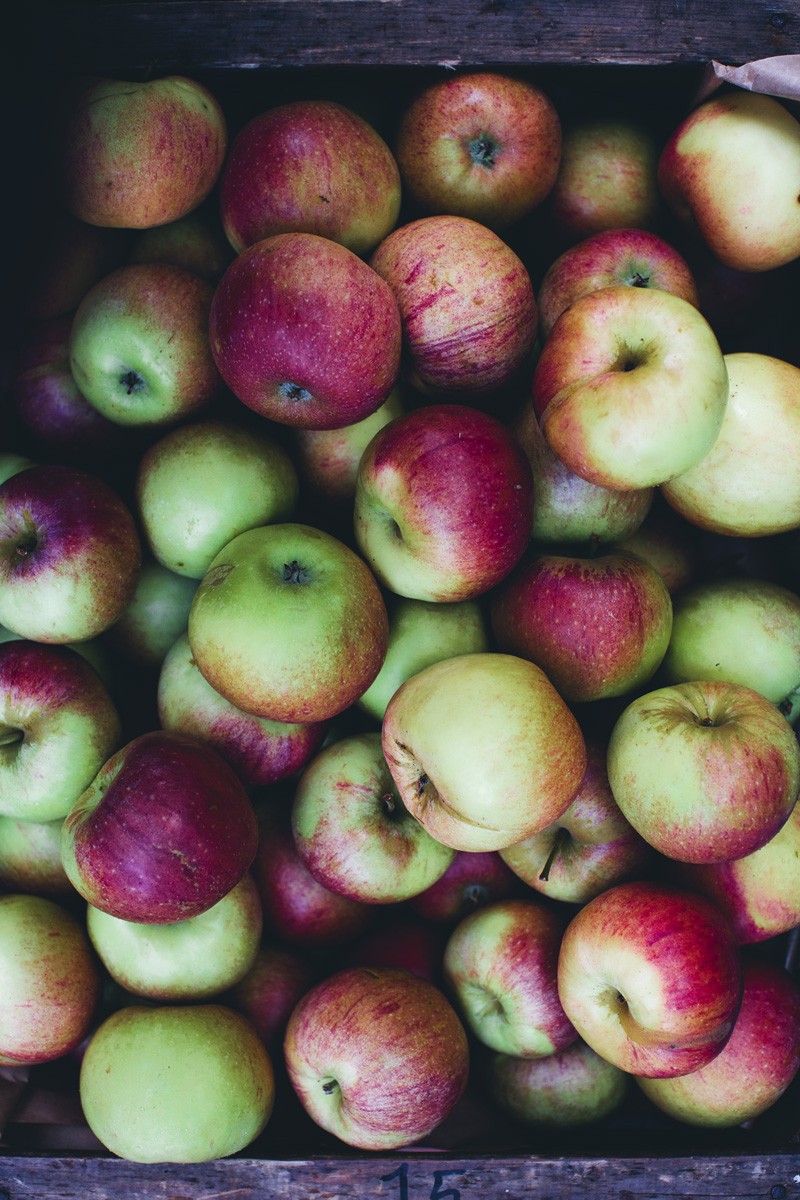 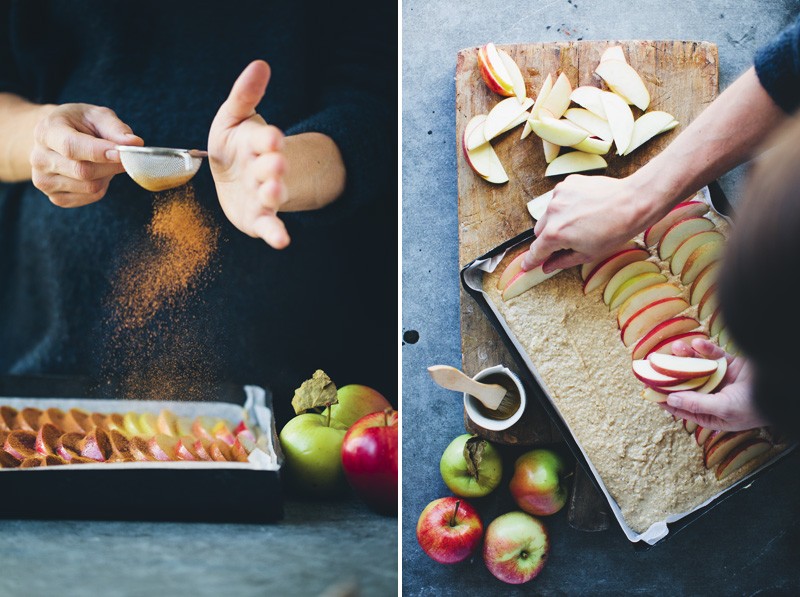 Okay … obviously Luise has no idea what she is talking about. The first cake had way too much cinnamon on it and I hadn’t separated the eggs in the batter so it didn’t rise properly. The photos looked terrible too. So that’s that. What she also forgot to mention is that – thanks to me – we have plenty of cakes in the freezer now, which actually is one of the things on that to-do list of hers. Ha!

Back to the cake. I have a long history of not liking apple cake. I have learned to love it now but I do still think that many cakes are too sweet, some are too dry and other have too much apple pieces mixed with the batter. This one is inspired by a slice of apple cake that we tried at the farmer’s market earlier this autumn. It was perfect. Moist, flavourful and with lots of cinnamon and large apple slices on top and a hint of grated apples in the batter. Ever since we tried it, I have been experimenting with my own versions of it. And as Luise so lovingly pointed out, it has taken a few attempts to get it right. We are using one of our favourite flour mixtures to get a good texture. Oat and almond flour adds nuttiness and richness and rice flour keeps it light. I like to bake it in a small tray to get the right height (roughly 2,5 cm / 1 inch), but it works well as a thick cake in a traditional round cake tin as well  (just increase the baking time 5-10 min). Instead of serving it with the traditional vanilla custard, we prefer a ginger-spiced greek yogurt which adds a nice tartness to balance the sweetness in the cake. /David 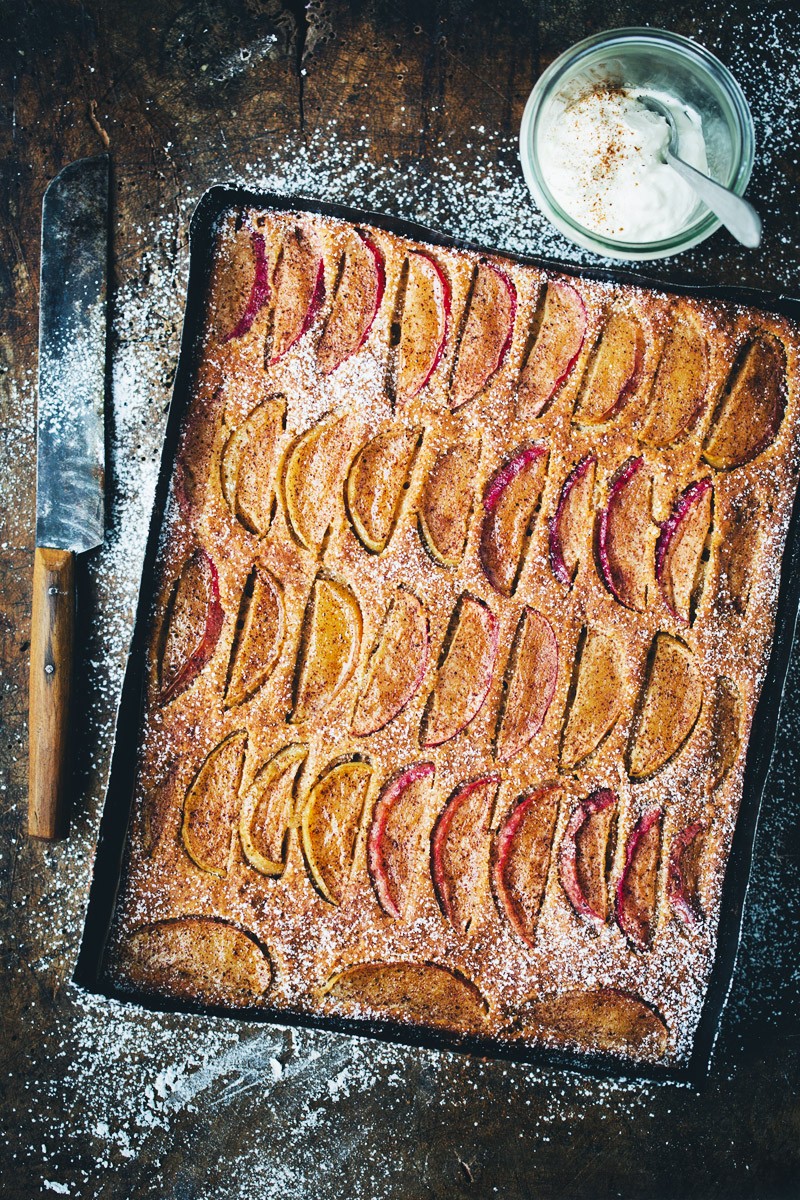 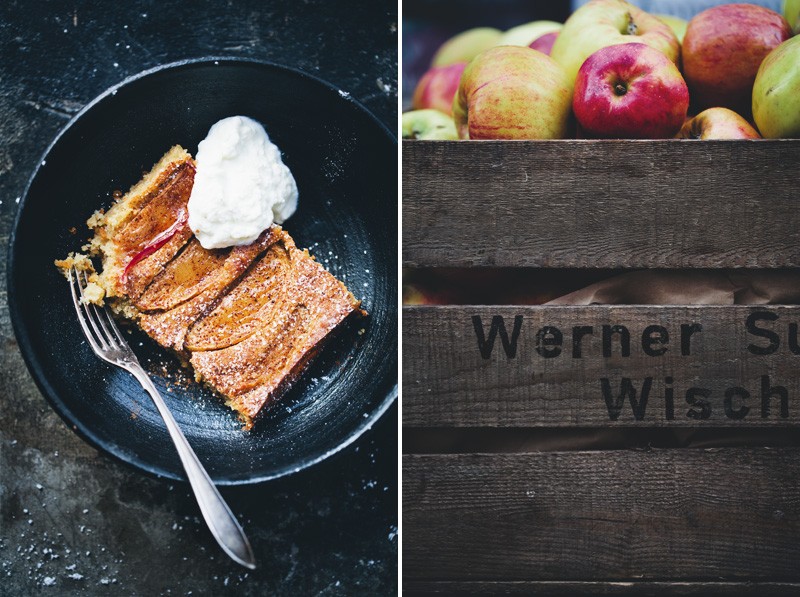 Place the oats in a food processor and blend until the texture resembles coarse flour. Transfer to a large mixing bowl, add the rest of the dry ingredients and stir until combined. Make a well in the centre and set aside while preparing the wet ingredients.

Place the egg whites in a separate bowl and beat until soft peaks form. Using a spatula, gently fold the wet ingredients, followed by the egg whites, into the dry ingredients until just combined, making sure not to over mix as the cake will be compact otherwise.

Pour the cake batter into the tray. Cut the two apples in thin slices and place them on top of the batter, pushing them down just slightly. Brush the slices with melted butter and the dust the cake with cinnamon. Bake for approx. 45-55 minutes or until golden and a skewer inserted in the centre of the cake comes out clean. Remove from the oven and set aside to cool slightly in the tin before transferring to a wire wrack to cool completely. Store the cake at room temperature in an airtight container and it will keep for a few days.

To make the yogurt, simply scoop it into a bowl, grate the fresh ginger into it, add maple syrup and lemon and stir until combined. Taste and adjust the flavours after preference.

PS! I sprinkled the cake with some powdered sugar because it looks pretty on the photos but it’s really not necessary for the flavor. 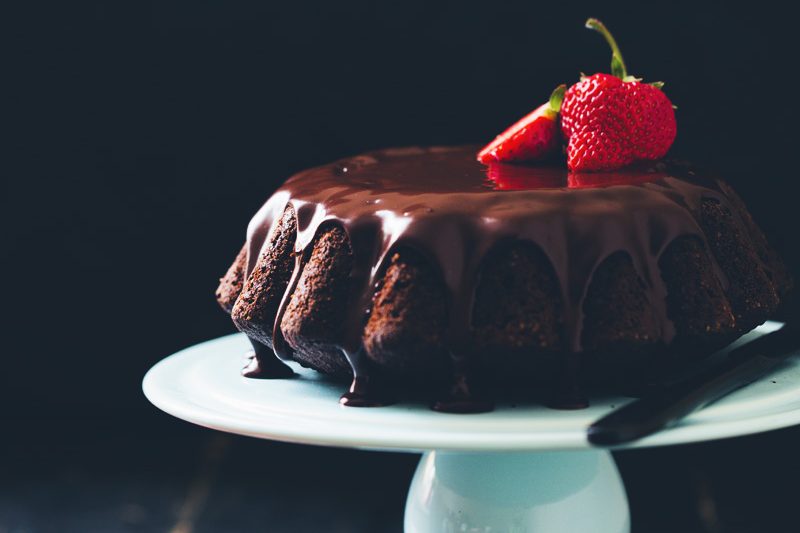 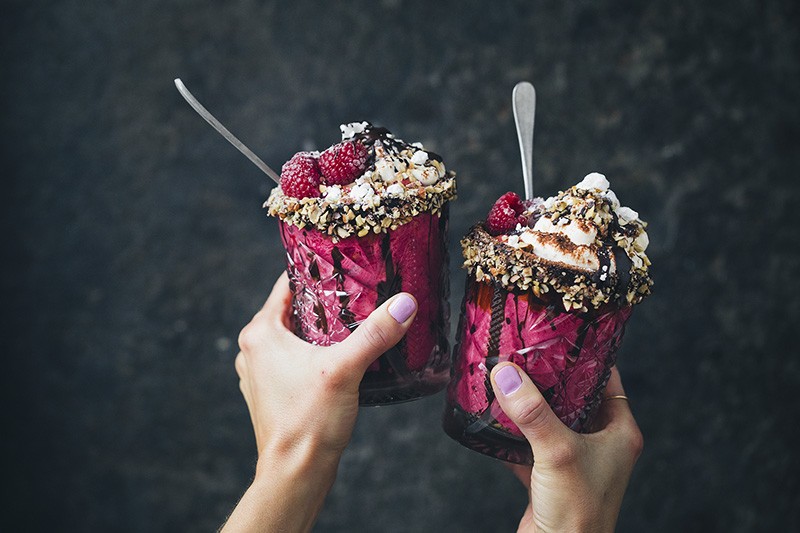 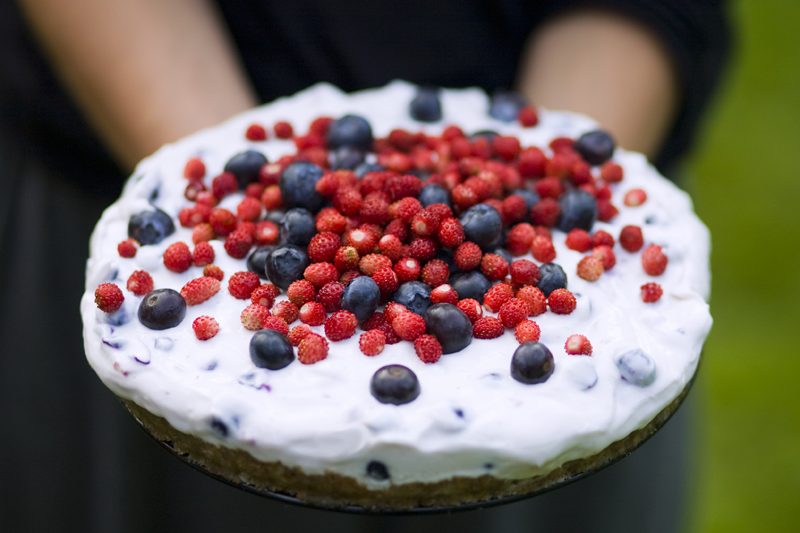 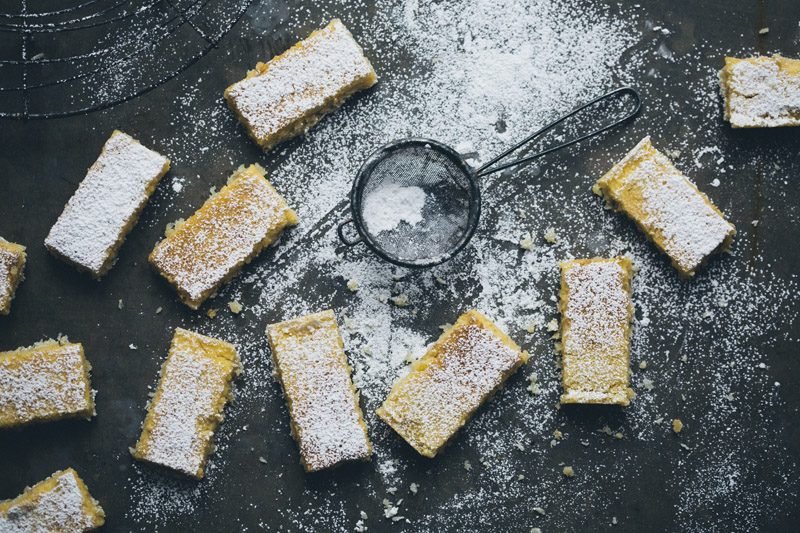 Leave a Reply to Green Kitchen Stories or Cancel Reply