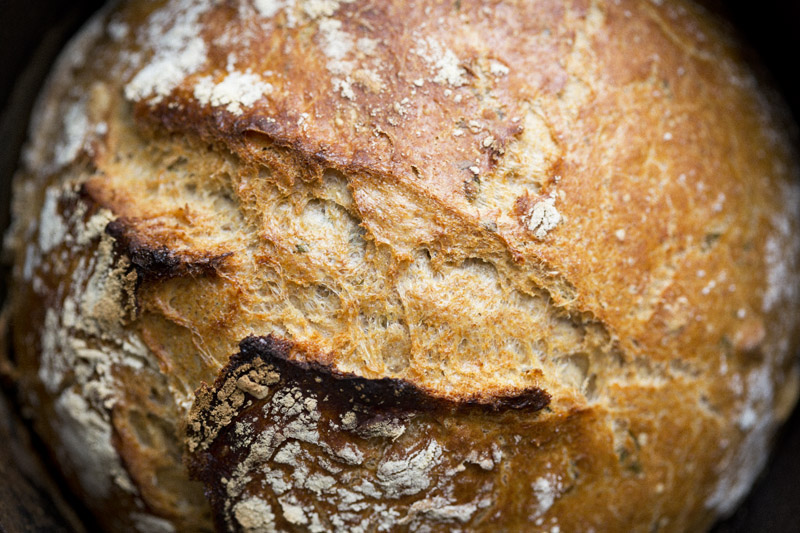 “Tap tap tap”, Luise leans forward and puts her ear closer to the bread crust. “Yep, this one is also good”. It’s her third bread today. All with different flours, but with the exact same baking technique. Earlier this week she found Mark Bittman’s 6-year old New York Post article on Jim Lahey’s no-knead bread. Although the recipe has been circulating for quite a while, we couldn’t resist making our own version of it, using more wholesome flours.

Baking isn’t normally our strongest area, so when we succeed with three breads in one day, it must be a fail-free technique. We love sourdough bread, but ever since our sourdough starter tragically past away, we gave up the thought of making our own again. This recipe has however the flavor and texture of a sourdough without the need of a starter. This is thanks to the long fermenting process. The fermenting also spares you from kneading it, time does all the work. One trick to succeed is to get the pot really hot. So when you add the wet dough, it’ll create a moist and steamy environment that gives the bread that perfect crust.

We ate several slices hot from the oven, with just a slab of butter on them. So damn good. 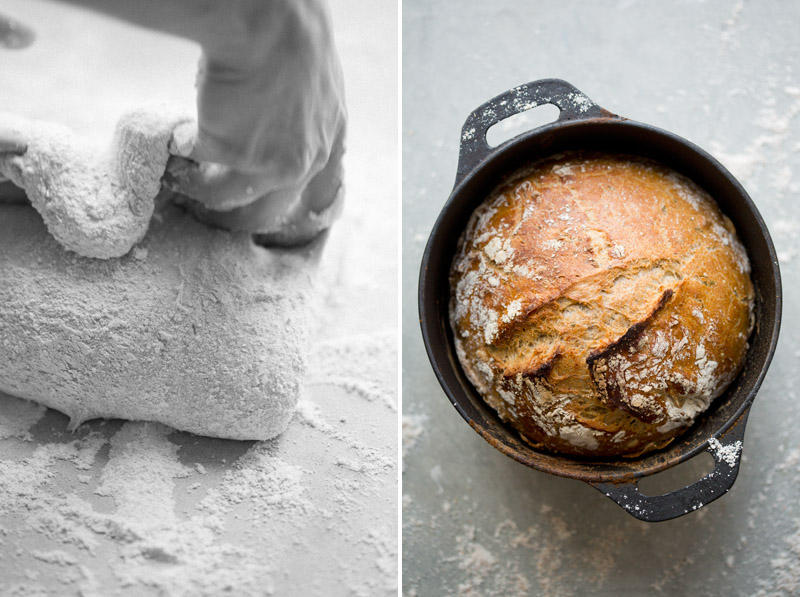 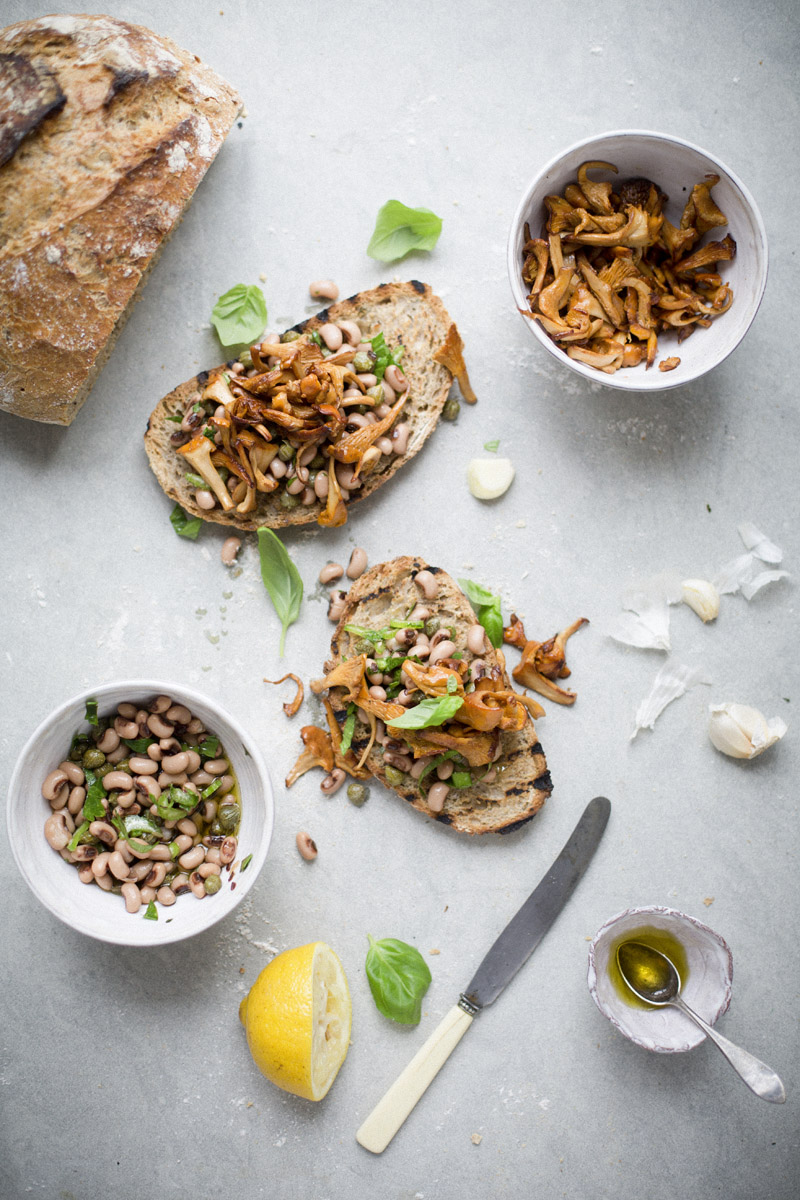 As it got closer to dinner time we started talking about the bag of chanterelles that we had lying around.

Chanterelles are very popular here in Sweden during August and September. Almost everyone I know has their own secret spot in the forest where they claim chanterelles grow like a yellow carpet. We don’t have any secret places like that. So when we can’t tag along some of our friends, we just go and buy a large bag of them at the market. One of the simplest yet most delicious way to eat chanterelles is stir-fried on a sandwich. So for dinner, we combined that Swedish chanterelle sandwich with a recipe for an Italian bean bruschetta that we sometimes make. The result was great. The beans added creaminess and tanginess and made it more into a dinner than just a sandwich. So, next time you feel like making a bruschetta, skip the tomatoes and try this bean and mushroom combo instead. We have included the recipes for both the bread and the bruschetta here. Happy weekend! 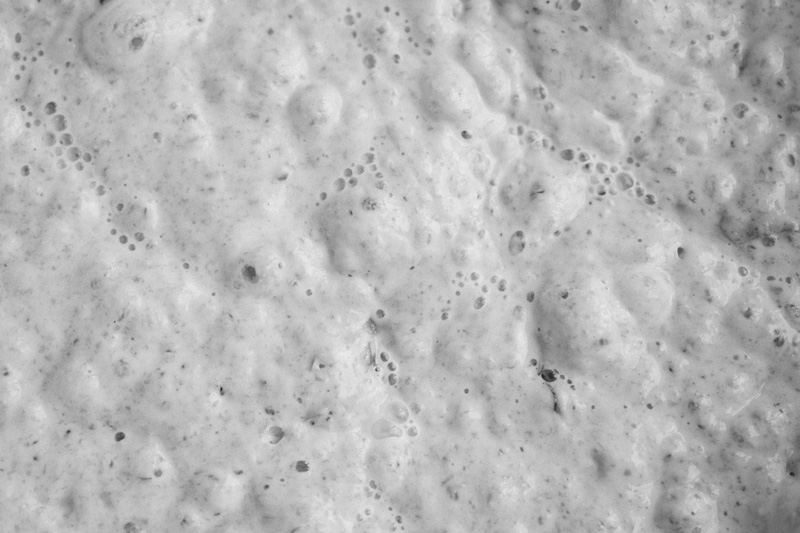 The spelt dough after 15 hours of fermentation.

We have played around with rye flour, spelt flour, kamut flour, whole wheat flour and it doesn’t seem to changes the amounts of flour much, so choose your favorite flour and give it a try.

Place water in a large mixing bowl. Solve the yeast into it by stirring with a spoon or your hand. Add salt, honey, herbs and kale and stir until well mixed. Sift the flours and add to the water mixture. Mix together until all is combined, yes it will look kind of loose and messy and not as pretty as a traditional bread dough, but that is normal. Cover with plastic wrap, set aside to ferment in room temperature for 12-15 hours.

When you unwrap the bowl, the dough is bubbly and sticky. Prepare your work surface, flour the kitchen counter and a kitchen towel (you’ll use that later). Pour the dough out on the flour covered surface and dust the dough with flour or it will be to sticky to handle. Then fold it 4 times. Take the first side and fold it onto the middle of the dough. Repeat this for the opposing side, then do the same thing to the top and bottom. Now place the folded dough on the flour dusted kitchen towel with the folded sides down. Fold the kitchen towel over the dough and let rise for 2-3 hours (in room temperature). When there is about 40 minutes left of the rising time, turn on the oven to 500F (250°C) and place the dutch oven (no greasing needed) with the lid on in the oven. When the oven is ready, the dutch oven is smokin’ hot and the dough is done rising. Carefully remove the dutch oven from the hot oven, using oven gloves. Unwrap the dough and place/drop it in the dutch oven. Slash the dough with a knife, then cover with the lid and place it back in the hot oven. Bake for 30 minutes, then lower the to 445F (230°C), remove the lid and bake for another 15 minutes. Remove it from the oven, let cool slightly, turn the dutch oven upside down and place the bread on an oven rack to cool. 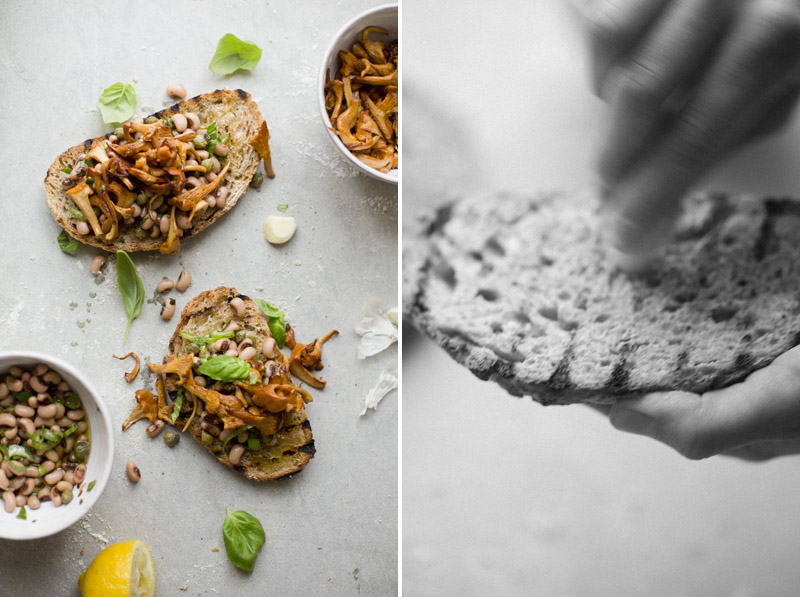 Cut 4 thick slices of bread. Set a chargrill pan on high heat (without oil) and grill the bread slices for a few minutes on each side until grill marks appear.

Assembling: Rub each slice of grilled bread with a garlic clove. Spoon the bean mixture onto the slices and top with chanterelles and a fresh basil leaf. Add extra olive oil if needed. Serve warm. 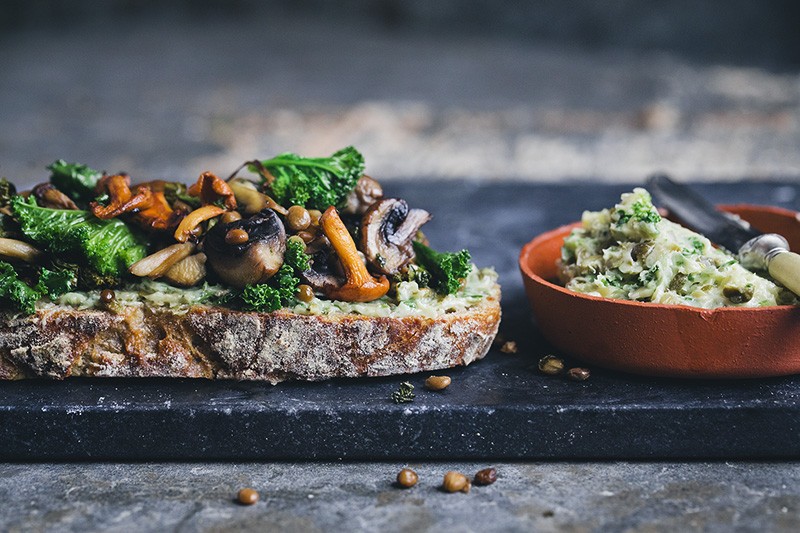 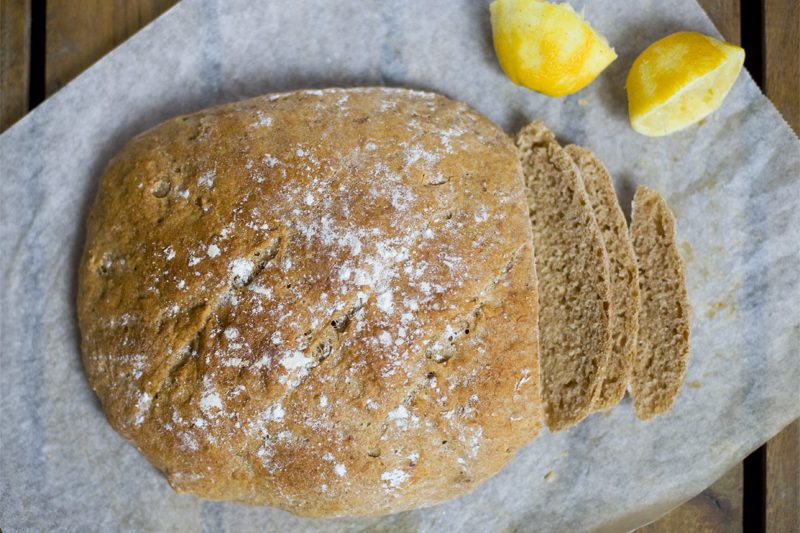 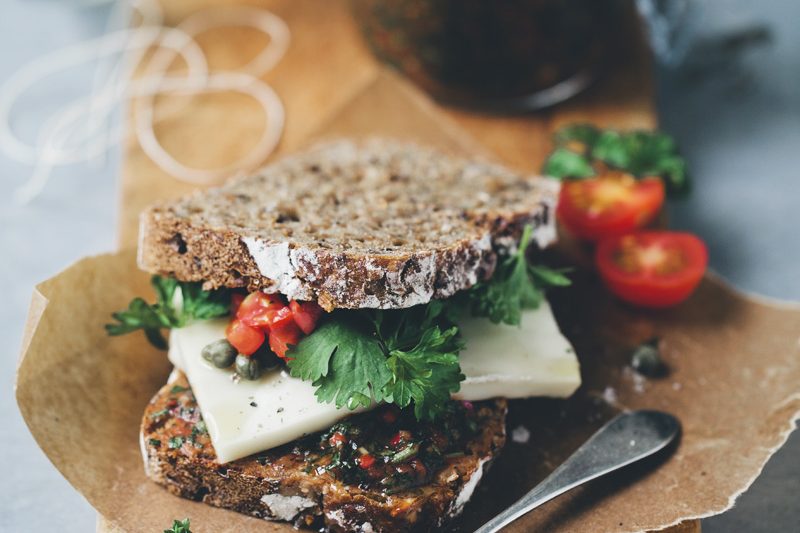 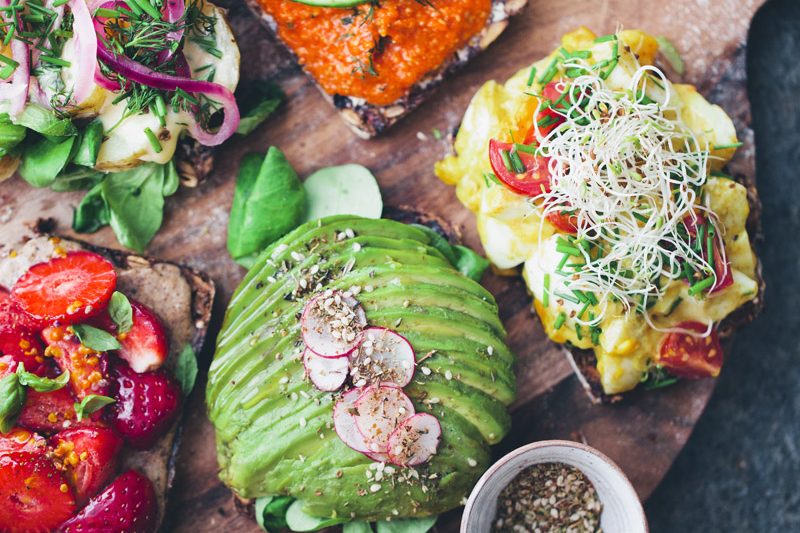